There is an enormous disconnect between the world of forensic psychology (with its decades of extensive research on psychopathy) and that of prison/sentencing reform, where the word "psychopathy" is never even mentioned. Dr. Lawrence bridges these two worlds with a common-sense approach illustrating while most incarcerated people, even those convicted of violent offenses, are capable of redemption and rehabilitation, there is a small minority with psychopathic traits who, in the interests of public safety, should not be released.

Dr. Lawrence is available for panels, presentations, lectures, podcasts, and media interviews on the subjects of prison/sentencing reform, ending life without parole sentences, prisoner rehabilitation, and the impact of childhood trauma and psychopathy on societal and world problems.

2) What is the single most defining feature of a psychopath?

3) Why are psychopaths so difficult to identify?

4) What are the most important things people can do to help someone who has been victimized by a psychopath?

5) What is the PCL-R (Hare Psychopathy Checklist-Revised), how is it used, and what controversies surround it?

6) Is there a tool for employers to use to screen out potential psychopaths during the interview process?

7) Do you still support releasing people who have committed violent crimes despite your concern about psychopathy?

8) Why do you equate the long-term effects of childhood abuse and trauma with life without parole sentences?

9) What role do you think psychopathy plays in the origins of the ongoing cycle of childhood abuse and trauma?

10) There is a lot of discussion about using one's childhood trauma as a pathway to personal growth and development, i.e., "post-traumatic growth."  Do you think all forms of childhood trauma can be completely healed? 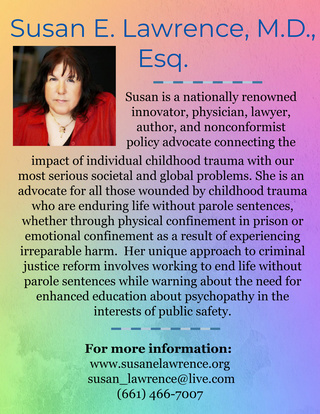 Interview with Dr. Lawrence by Attorney at Law Magazine.

Beyond the Death Penalty: Activists are Fighting to End Death by Incarceration

Dr. Lawrence was interviewed for this article about her work to end LWOP in Vermont.

Creating a Healing Society: The Impact of Human Emotional Pain and Trauma on Society and the World

Childhood trauma as the root cause and driving force of societal and global problems.

I Helped Free a Man From Life Without Parole. Then He Turned on Me.

I believed I was helping an honorable, decent man — until he was released from prison.